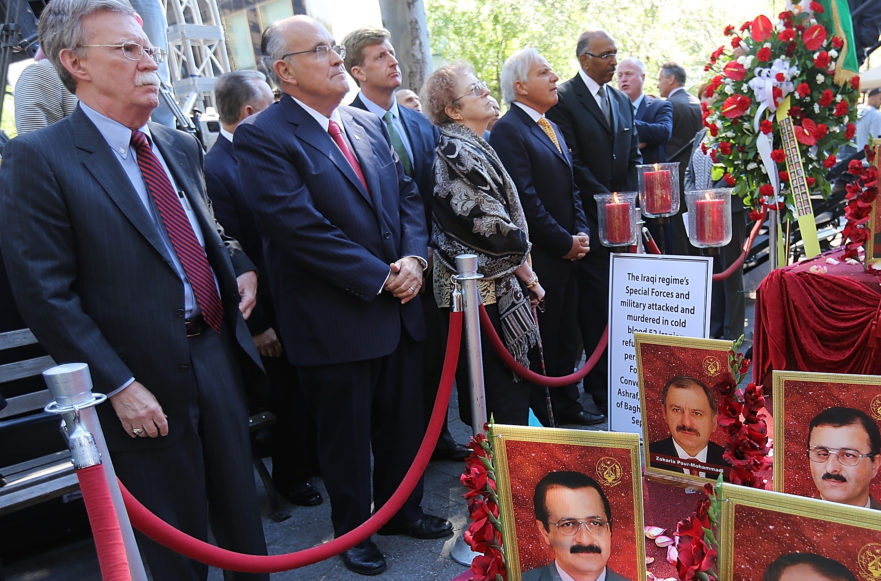 National Security Adviser John Bolton appears to be spiraling down into the same miasma of madness that possesses other members of the Trump administration– perhaps caused by a microbe carried in Trump’s sniffle. This week he threatened justices of the International Criminal Court in the Hague with physical abduction were they to dare indict an American for war crimes committed in Afghanistan.

The International Criminal Court was established by the Rome Statute, which went into effect in 2002 has been ratified by 123 nations of the world. Most of Europe and all of Latin America and half of African states have signed. Virtually the only deadbeats are countries whose officials are afraid of being indicted by the court for serious human rights crimes, such as Syria, China, India, Sudan, Israel, Russia and . . . the United States of America (actually the latter four signed but they pulled out when they realized that they had exposed their state officials to prosecution, what with the war crimes they are constantly committing).

The ICC undertook to try dictator Moammar Gaddafi, but he was killed before he could be brought before it; it still has an outstanding case against the dictator’s son Seif. For Bolton to menace it in this way makes clear that he is in the Gaddafi category, which is why he fears the institution.

Bolton has no particular expertise in anything at all, he is just an angry shyster lawyer picked up by the more insane elements of the Republican Party as their pit bull. He once denied that the United Nations exists, then tried to make him US ambassador to the United Nations (he wasn’t confirmed, but served briefly on a sneaky Bush recess appointment).

So here are five crimes that I allege Bolton has committed, for which he by all rights should face justice at the Hague, at the hands of the same ICC judges that he just brutishly threatened:

1. Bolton played a key role in hoodwinking the American public into the 2003 US war of aggression on Iraq, for which there was no legitimate casus belli or legal basis for war. The UN Charter forbids the initiation of a war except where a country is attacked and responds in self-defense or where the UN Security Council designates a government as a threat to world order (as it did Gaddafi’s Libya). These attempts to outlaw wars of aggression were a reaction against the Nazi invasion of Poland, etc. People like Bolton, who don’t want any constraints on his power from the international rule of law, are just trying out for the role of people like Nazi generals Günther von Kluge and Gerd von Rundstedt, who led the assault on Poland. (Like Bolton in regard to Iraq, they maintained that they were only defending themselves from a menacing Poland, but nobody believed this lie).

Bolton is manifestly guilty of the crime of aggression under the Rome Statute and its 2010 enabling statutes adopted at Kampala: Article 8 bis, para 1, says: For the purpose of this Statute, “crime of aggression” means the planning, preparation, initiation or execution, by a person in a position effectively to exercise control over or to direct the political or military action of a State, of an act of aggression which, by its character, gravity and scale, constitutes a manifest violation of the Charter of the United Nations.

As Under Secretary of State for Arms Control and International Security under Bush, Bolton was clearly a high executive officer of a government guilty of the crime of aggression.

2. As National Security Adviser, Bolton has supported the Apartheid policies of the far-right extremist government of Israeli prime minister Binyamin Netanyahu toward the Occupied Palestinians.

Apartheid is a crime under the Rome Statute:

He also supports the transfer of Israeli citizens into the Occupied West Bank as squatters on Palestinian land.

8.2.b.viii stipulates as a war crime,

Bolton strongly supports and enables a whole range of war crimes of the Likud regime in Tel Aviv against the Palestinian people, above all keeping them in a condition of abject statelessness and continually stealing their property.

Under war crimes comes “Extensive destruction and appropriation of property, not justified by military necessity and carried out unlawfully and wantonly.”

It could be argued that Israel could not engage in these illegal violations of Palestinian rights save for the American veto, so that high US officials who conspire to enable crimes like Apartheid and usurpation of Occupied Territories are even more guilty than Israeli officials.

3. Bolton is in the back pocket of, has spoken for, and may have received significant monies from the People’s Jihadis (Mojahedin-e Khalq), a group that has been on the US State Department terrorist watch list and which has killed civilians with bombings and attacks in Iran. They even had a base given them for these purposes by Saddam Hussein, in whose company Bolton has fallen, given their alliance with this same Iranian cult.

The MEK is guilty of “a widespread or systematic attack directed against any civilian population, with knowledge of the attack,” and under this heading, of murder. In fact, it has killed Americans. Bolton gets red in the face about threats to the US except that he pals around with people who have the blood of Americans on their hands.

How delightful it would be to see Bolton at the Hague, before the very judges he threatened to kidnap.

This article originally appeared at commondreams.org