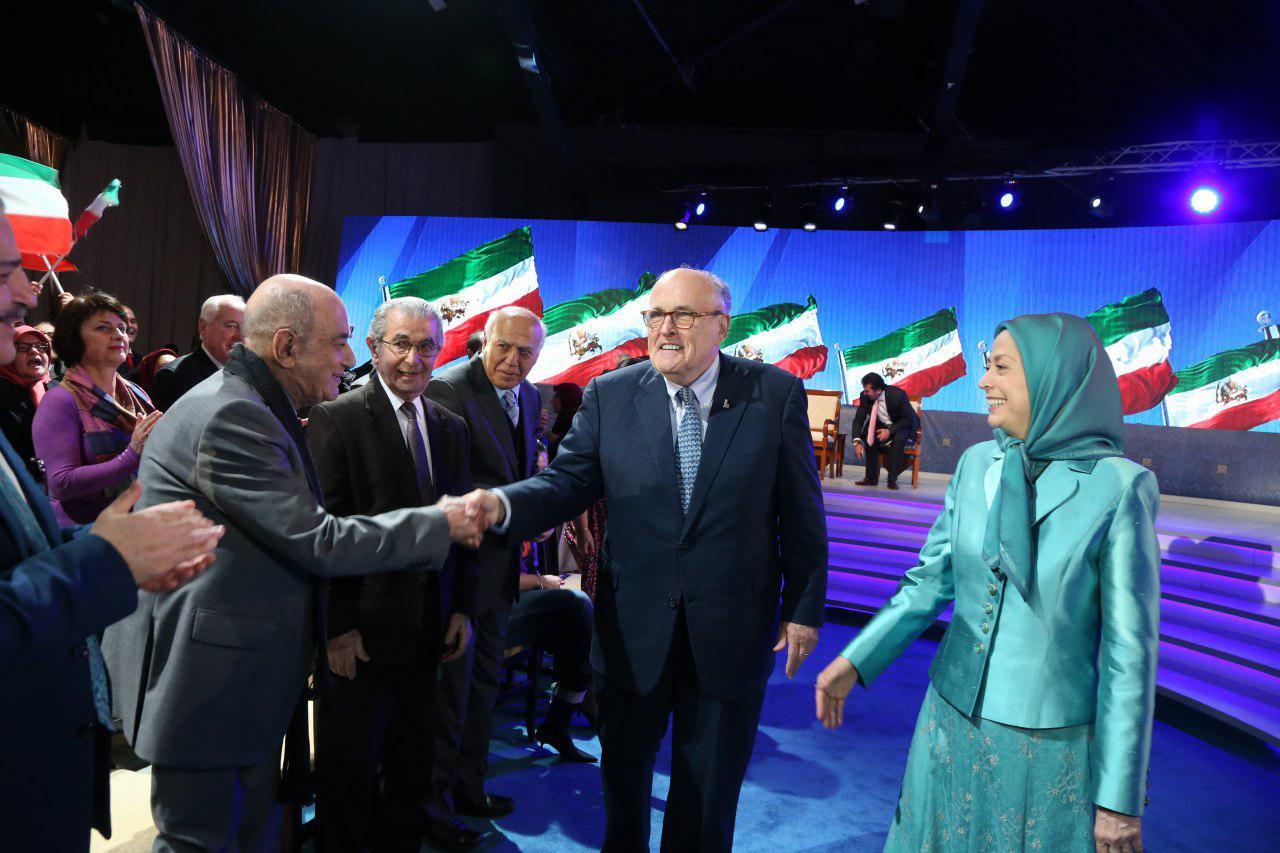 On March 22, 2018 the former Mayor of New York and adviser to President Trump, Rudy Giuliani was in Tirana. He was invited to Albania’s capital by Maryam Rajavi, the head of the Mojahedin-e Khalq (MEK) organization, to celebrate the Iranian festival of Nowruz with the Iranian jihadist organization which Albania has hosted since 2013. In this meeting, which was secretly organized by the Mojahedin, Giuliani showed his support for some 3.000 Iranian radicals that Albania hosts. In his speech Giuliani encouraged the Mojahedin to continue their fight against the government of Iran and called for regime change in Tehran.

The gathering of the Mojahedin was also attended by three Albanian politicians. They were Pandeli Majko, Minister for the Diaspora in the present Albanian government. Majko served as Minister of the Interior during the era of secret CIA renditions in Eastern Europe when Albania was used by the CIA to rendition and torture people. Majko who has never denied his cooperation with the CIA or the existence of secret prisons in Albania, has defended the illegal renditions and torture and has criticized those who spoke against the torture chambers of the CIA.

The second politician was Fatmir Mediu, a former disgraced Minister of Defense, who is blamed in Albania for weapon trafficking to Afghanistan and the Gerdec explosion and killings. The Gerdec explosion which killed 26 Albanians, injured hundreds, and damaged or destroyed over two thousand homes was part of an operation by Fatmir Mediu and American contractors to fake old Albanian ammunition and sell them as new to Afghanistan.

The third politician was Elona Gjebrea, who served as deputy Minister of the Interior for Albania’s infamous Minister of Interior Saimir Tahiri (2013-2017) and is now under investigation for possible links with a notorious Albanian mafia gang known as the Habilaj brothers.

The threats of Giuliani against Iran have been instrumentalized in recent months with mass surveillance and attacks on Iranian and Shiia Muslim institutions in Albania and Kosovo. The Israelis are very vigilant against the Iranian influence in the Balkans too. They instruct their Albanian partners to target Iran and its institutions, even though Iran has never had any problem with any Balkan country. With the arrival of the Mojahedin in Albania, the anti-Iran and anti-Shiia hysteria is becoming more and more public. The Mojahedin, who act as a proxy army for the US and Israel, claim that Iran is very influential in Albania and is working with its agents to discredit their fight for regime change. In recent months they have launched a number of smear attacks against Iranian institutions and the embassy in Tirana. On March 15 they attacked a group of Albanian intellectuals headed by the ex-president of Albania, Rexhep Mejdani who participated in a scientific conference in Tehran, claiming that they were part of a plot by Tehran to discredit them. The Mojahedin, who are having many of their members abandon the organization in Albania, attack the defectors by insulting them as Iranian agents and threaten to assassinate them. The UNHCR which is supposed to help all war refugees has sided with the Mojahedin and refuses to support the defectors financially and asks them to go back to their Mojahedin camp if they want to get financial support. When local Albanian TV stations dare to present the claims of the defectors who show how they are abused, enslaved and radicalized by MEK, the Mojahedin attack the Albanian media claiming that they have been bought by Iran.

In face of the threats that MEK makes against Albanian intellectuals, media and its defectors, the Albanian government keeps silent, even though a recent police report claims that the Mojahedin might assassinate some of the defectors who have abandoned the organization. While the Albanian government and its courts are very vigilant to jail any Albanian Salafi as a terrorist if they make calls for regime change in Syria or praise ISIS, so far no actions have been taken against the Iranian Mojahedin, Albanian or US politicians who support the MEK jihad and make calls for regime change in Iran, even though the Albanian the criminal code punishes such calls with imprisonment from four up to ten years. The Albanian government and its courts have not taken any action even against those Mojahedin who have threatened to assassinate their defectors in Albania.

The Albanian government who is ordered by people like John Bolton, John McCain and Rudy Giuliani to do all they can to support the Mojahedin, have finally started to attack even Shiia and Sufi religious institutions in Albania. On March 22, 2018 the anti-terror police disrupted the ceremony of Novruz that the World Headquarters of Bektashism organized in Tirana. The ceremony of the liberal Muslim Sufi sect was disrupted when anti-terrorism police detained two retired Iranian journalists and an Iraqi-German citizen who were celebrating the Novruz in the Grand Sufi Teqe. The invitees were officially invited to the ceremony by Baba Mondi, the Grand Dervish of the Bektashis. However the Albanian anti-terror units who take note of complains by MEK about Iranian influence and conspiracy against them, detained and interrogated as terrorists for 7 hours the two retired Iranian journalists who were covering the Bektashi festival. Even though the journalists were later released, this event shocked the Bektashi community and the Iranian cultural NGO-s who operate in Albania.

The attacks that the Mojahedin are launching against local Muslim communities, academics and intellectuals, journalists and media are shocking the Albanian public. Until now they have seen the Mojahedin as some foreign terrorist leftovers that the USA wanted to dump in Albania after they were expelled from Iraq. However, the recent media and police attacks are showing to the Albanian public that the Mojahedin are a threat not only to Iran, but to Albania too. On the other hand, the calls from US senators like Rudy Giuliani, John Bolton and John McCain on the Mojahedin who are based in Albania to go and wage jihad in Iran, make many Albanians worried and upset. Many ask: if the USA wants to use the Mojahedin to fight Iran, why don’t they host them in the USA instead of Albania? The Albanian public has not and has never had any problem with Iran. Why is the American government blackmailing Albania and using it as a launchpad for its next terrorist war against another Middle Eastern country? Was it not enough for the US administration to allow the Saudis to radicalize the Muslim youths in the Balkans and send them to Syria for jihad, but now they are creating another jihad and the Muslims of the Balkans are again to pay the price?

Mr. Rudy Giuliani! Mr. John Bolton! Can you please take your Mojahedin to the USA and from there do anything you want! We do not want to fight another Middle Eastern war for you. Leave us alone, please!