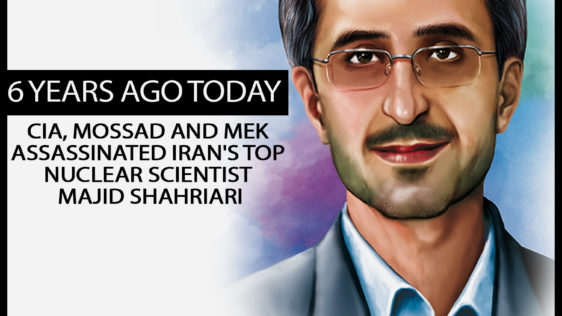 This November 28th is the sixth anniversary of the assassination of leading Iranian nuclear scientist Majid Shahriari, whose death represented a particularly disgraceful episode in the attempts made by Israel’s Mossad intelligence service to interfere with and damage Iran’s peaceful nuclear research program. Shahriari, who reportedly had no connection to any possible military applications in his research, was the most prominent of the four Iranian nuclear scientists and technicians who were killed by terrorists between 2010 and 2012. He was a leader in the development of Iran’s atomic power research and development program and was internationally respected for his expertise in quantum physics and neutron transport.

Within the international intelligence community, it has been generally understood that Mossad planned and prepared the killing of Shahriari and the others, attacks which were almost certainly carried out by associates of the radical Marxist group Mujaheddin e Khalq (MEK).

The assassinations were based on the false premise that Iran had a nuclear weapons program that could be disrupted by killing the scientists and technicians involved. Two comprehensive studies by the American government’s Central Intelligence Agency (CIA) conducted in 2007 and 2012 determined that no such program existed and that Iran had never taken any serious steps to initiate such research. Israel was also aware that there was no program. Nevertheless, the Israeli government, sometimes working in collusion with the American CIA, took steps to interfere with Iran’s existing and completely legal and open to inspection atomic energy program by identifying then killing its scientists and introducing viruses into its computer systems. This was in spite of the fact that Iran was fully compliant with international norms on nuclear research and it was a signatory to the Nuclear Non-Proliferation Treaty (NPT), which Israel, possessing its own nuclear arsenal, had refused to sign.
As a result of last year’s signing of the Joint Comprehensive Plan of Action (JCPOA) between Iran and the so-called P5+1 consisting of the United States, Russia, China, France, Britain, and the European Union, any remaining concerns that Tehran might even be considering the development of a nuclear weapons program were greatly diminished. Iran has since that time been in compliance with the agreement, possible nuclear proliferation has been avoided, and, apart from the fulminations of certain anti-Iranian politicians in the United States, the signatories to the agreement have expressed their complete satisfaction with the outcome. It is now up to Washington to live up to its part of the agreement by easing remaining restrictions that are being imposed against Iranian financial institutions and regarding the purchase of some commercially available dual use technologies.

But in spite of the relative stability provided by the JCPOA, the meticulously planned and executed death of Shahriari must not be forgotten, if only to remind the world of the ruthlessness which Mossad and other intelligence agencies often pursue their targets even when those they victimize do not really constitute actual threats. Majid Shahriari was killed one morning as he was driving into work in Tehran. He was in a Peugeot that was making its way slowly through the heavy rush hour traffic when a motorcycle pulled up next to him as it weaved its way among the cars. The motorcyclist attached a bomb to the Peugeot’s window before he drove off and detonated the device by remote control from a distance. Shahriari died in the blast and two other occupants of the vehicle were injured. At the same time, another car in another part of Tehran was attacked in the same fashion, though the couple inside realized what was happening and managed to get out. They too were injured.

Majid Shahriari left behind a scientist wife and two young children. It should be observed that even though MEK was the likely perpetrator of the attacks, the technical aspects of the operation were far beyond its limited capabilities. First of all, it was necessary to identify the scientists who were to be targeted, no simple task as the Iranian government and atomic energy agency would have taken steps to restrict such information. Only a major foreign intelligence service would have had the capability to penetrate secure government communications to learn who the scientists were and where they lived, to permit an attack to be planned and executed. Both CIA and Mossad would have had such capability and both are also known to have contact with MEK, a relationship that was and still is particularly close in the case of the Israelis.

After identifying the targets and working out a plan for connecting with them it would have been necessary to engage in extensive surveillance to make sure that the approach and timing would work flawlessly. That would require time, training, and money to support the activity, exactly the sort of thing that a state sponsored intelligence agency would be good at. Then it was necessary to devise the bombs to be used to kill the targets. This was no simple matter in practice because the bombs that were put together were highly sophisticated and designed to kill all the occupants of the vehicle. They were shaped charges that directed the blast into the car and they also incorporated small metal projectiles that would fill the target vehicle with a lethal spray.

Among intelligence agencies Israel has the best deserved reputation for being an organization that favors the use of assassinations, so the suggestion that it was behind the killing of Shahriari and several of his colleagues as well as the attempted assassinations of others fits neatly into the Mossad modus operandi. The United States, also no friend of Iran, almost certainly provided support to other programs like the creation of the Stuxnet virus that crippled Iran’s scientific computers, but would likely balk at the assassination of civilian scientists. Israel would have no such misgivings and has, in fact, killed civilians in all the countries that surround it.

Majid Shahriari certainly should be remembered for his exemplary work as a scientist, but his assassination should also be a reminder that Israel makes up its own rules and its ruthlessness in dealing with its neighbors should be clearly and candidly recognized for what it is.

This article was originally published iricenter.org