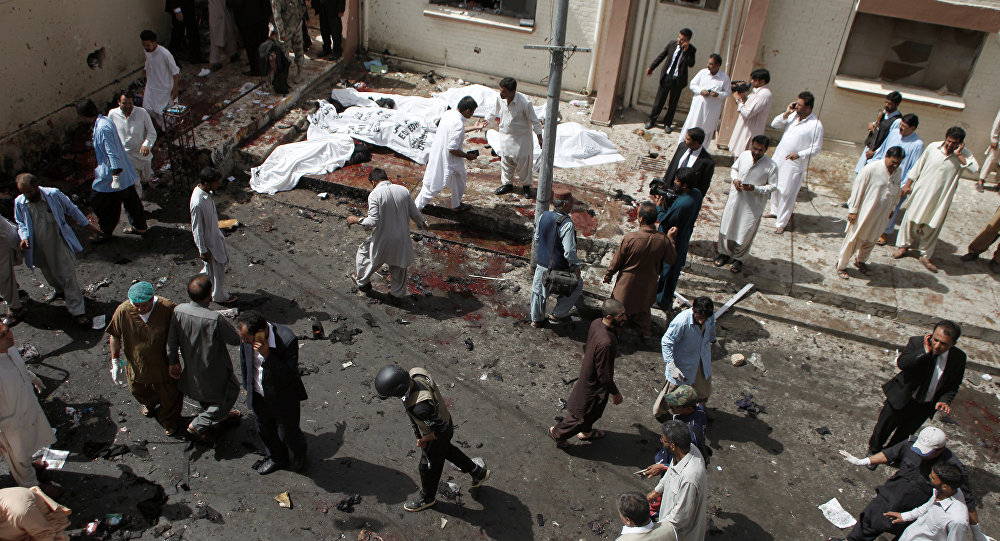 Pakistan is one of the worst victims of terrorism perpetrated by religious extremist groups claiming their adherence to what they call “pure” Islam. According to Global Terrorism Index the top 5 countries affected by terrorism include Iraq, Afghanistan, Nigeria, Pakistan, and Syria accounting for 78 percent of global terrorism related deaths in 2015.

In fact, Pakistan is paying the price of fighting the US’ proxy war against the Soviet Union in Afghanistan. The madrasas established in Pakistan during 1980s for indoctrination of Afghan refugees to fight a ‘holy war’ against the ‘Soviet infidels’ who had started ruling the country through their puppets in Kabul have played a very important role in developing a cult of romanticized violence in Pak-Afghan region. The cult of gun and suicide bombings has significantly marginalized a vibrant progressive community in Pakistan and the country is on the verge of virtual collapse thanks to a sinister nexus between the ruling elite in the army and political circle on the one hand and the religious zealots on the other.

It is not only in Pakistan alone, but the rise of religious extremism in India, Bangladesh, Myanmar poses a real threat to minorities inhabiting these countries is a matter of concern for all peace-loving people of this region. It seems that if effective counter narratives to the religious extremist forces are not developed and strengthened, the region will become a hot bed of terrorism and violence resembling today’s Middle East. We should remember that the globalization has not only made the export of goods and services very easy, but it has also made it easier to export ideas and narratives, problems and grievances. Therefore, an ideology of hate and bloodshed near ones borders must ring an alarm bell for all.

The reign of terror unleashed in India by the self-declared cow protectors and other rightist groups, horrible attacks on minorities and independent bloggers in Bangladesh, the genocide of Rohingyas in Myanmar by Buddhist extremists are all examples of marking the rise of the ‘Majoritarian Right’ in South Asia.

Coming back to the threat of terrorism in Pakistan one has to accept that the cult of violence has been legitimized and made attractive by applying a carefully designed ideology. The ideology unfortunately is based on the appropriation and manipulation of teachings of Islam. An Islam that may not have the support of the majority of its adherents but it is implemented through guns and bombs. Those who try to question or counter the ideology of hate are mercilessly killed in broad daylight. The deep penetration of the religious zealots in the administrative machinery of Pakistan makes it easier for them to fix targets and achieve them with horrifying rate of success. It is to be pointed out that these religious extremists target mostly Muslims disagreeing with their version of Islam and therefore, this terrorism should not be termed naively and fashionably as ‘Islamic’. They have targeted even those who have nothing to do with politics of repression and oppression. For instance, one of Pakistan’s legendary singers, Amjad Sabri, was gunned down in Karachi for committing the crime of singing qawwali, which is prohibited by a particular brand of Islam.

Tahreeke Taliban Pakistan terrorists attacked an army-run school in Peshawar city of Pakistan on 16 December 2014 killing more than hundred children. The motive of the barbaric attack on innocent children studying in school became clear only when the Tehreek-e-Taliban Pakistan spokesman claimed that its suicide bombers attacked the army school as revenge for the Pakistan’s army operation against militants in the North Waziristan. The spokesman said that “we want them to feel our pain.” If we take the statement of the spokesman of the Taliban terrorists on its face value, the attack will seem as revenge for the alleged atrocities committed by Pakistan’s forces during the bout of counterterrorism. However, the fact is different from what Taliban wants to make us believe.

While analyzing the cause of the attack we should also take into account the fact shared by the organization called the Global Coalition to Protect Education from Attack. According to its report there were 838 or more attacks on schools in Pakistan during 2009-2012. In fact, for hot-headed religious zealots the modern education is a source of corruption and therefore it must be countered. The attack on Nobel Laureate Malala for championing the cause of female education must be in our mind. This attack was not only revenge, but it reflected a typical mindset of highly motivated, radicalized, and indoctrinated band of hot-headed religious zealots. This is evident from the fact that more than three million children mostly girls were forced out of schools since the Taliban came to power leaving a majority of present generation Afghan women illiterate.

There is no doubt that the government of Pakistan has also been discredited due to various movements and protest marches against the elected government. The drone attacks by the USA resulting in heavy civilian casualties for killing terrorist suspects have also alienated people from the government. The United Nations has warned the countries against gross violation of human rights during counter terror operations. The ongoing army operation Zarbe Azb against Taliban militants must ensure that innocent people are not made the target by the army. The power-politics played by the regional actors in the region is also responsible for this current bout of terrorism in Pakistan.

The worst crime is that which is committed in the name of religion. It is unfortunate the violent forces in Pakistan are misusing Islam for legitimizing their barbarism and delegitimizing the democratic dispensation. The fight against terrorism in Pakistan is more ideological in nature than the military. Therefore, an Islamic narrative based on peaceful coexistence must be developed and strengthened to delegitimize these forces of evil. The best solution for developing such a narrative or discourse is to accept all existing sects among Muslims as the diversity within Islam.