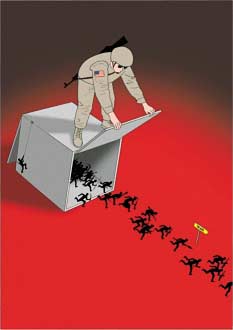 The MKO fled to Iraq in the ‎‏1980‏s, where it enjoyed the support of former Iraqi dictator ‎Saddam Hussein and set up Camp Ashraf in the eastern province of Diyala, near the Iranian ‎border.

The group also cooperated with Saddam in the massacres of Iraqi Kurds and in suppressing the ‎‏1991‏‎ uprisings in southern Iraq.‎

The MKO is listed as a terrorist organization by much of the international community and has ‎committed numerous terrorist acts against Iranians and Iraqis.‎

Iran has repeatedly called on the Iraqi government to expel the group, but the US has been ‎putting pressure on Baghdad to resist the calls.‎

Press TV has conducted an interview with Ralph Schoenman, author and political commentator ‎from Berkeley, to further discuss the issue. The following is a rough transcription of the ‎interview.

‎Press TV: To begin with, before Washington decides to take the MKO off of its terror list, why ‎had it for years supported the MKO and at the same time put it on its terror list? It seems very ‎paradoxical?‎

Schoenman: First of all, I want to emphasize to you that in The New York Times today and the ‎Guardian in London, the headlines confirmed that in fact the United States has removed the ‎MEK, Mujahedin Khalq, from the terror watch list, from the terror list in Washington.

‎What’s significant about this is that this is a terror group that has spent millions of dollars in ‎bribing various officials in the United States government at the highest levels. Public appearances ‎on behalf of the MEK included the New York Mayor, Rudolph Giuliani, Pennsylvania Governor ‎Edward Rendell, Obama advisor James L. Jones.‎

In addition to Giuliani, Rendell and Jones, the groups, advocates and public supporters included ‎Tom Ridge, the former Homeland Security Secretary, Howard Dean, the Head of the ‎Democratic Party, the former US Attorney General Michael Mukasey, the former FBI director ‎Louis Freeh, the former Joint Chiefs of Staff Chairman Hugh Helton, the UN Ambassador... ‎Mitchel Reese the top...official, and the top foreign policy advisor to Mitt Romney the ‎Republican candidate for the presidency of the United States.

Sixteen prominent US officials who went to Paris for an MEK rally last month including Newt ‎Gingrich, the former House Speaker and Republican president candidate; in a video, Gingrich is ‎seen bowing to the MEK’s cofounder, Maryam Rajavi, Massoud Rajavi’s widow. Gingrich ‎appealed for decisive action by the United States. ‎

Over ‎‏100‏‎ US legislatures were paid millions of dollars, and this is a criminal act, to bribe high-‎level public officials, openly in this case by a group that happens to be on the terror list, is a ‎criminal act, and everyone of these top officials should be subject to imprisonment for taking ‎bribes from such a group.‎‎

Press TV: What will be the fate of the MKO if it is expelled from Iraq?‎

Schoenman: I would like to point out to you that the MEK has been an instrument of US terror, ‎state terror, against the [Iranian government] and against the population of Iran since the time ‎that the regime of Saddam Hussein was directed by former National Security advisor Zbigniew ‎Brzezinski to invade Iran and to attempt to detach or amputate Khuzestan from Iran.‎

The significance of this is in part that there is a major base, Camp Ashraf, where the MEK-‎trained military are present and they are being requested by the Iraqi government to be removed ‎from there to another location, and that is an issue of some moment.

Try to bear in mind the significance of this. Every major official in this administration and ‎previous ones is involved in this operation. ‎

What we’re really looking at here is across-the-board state terrorism of the ruling class using the ‎MEK as a vehicle for assassinating public officials in Iran, for staging bomb attacks, for ‎executing scientists as the Mossad and the CIA have done.‎‎

It is central to the official US campaign of terror, state terror, against Iran and against opponents ‎of US imperialism in the region.