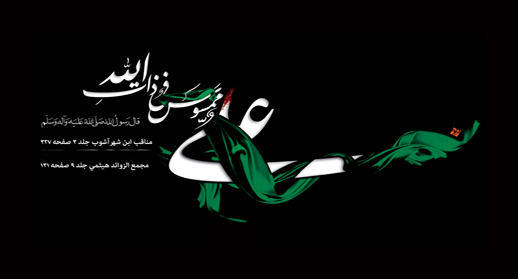 Imam Ali, the first man to believe in the final Messenger of God Prophet Mohammad (pbuh), was born inside Kaaba on Friday 13th Rajab, 600 A.D.

As he himself says: "The Holy Prophet brought me up in his own arms and fed me with his own morsel. I followed him wherever he went like a baby-camel following its mother. Each day a new aspect of his character would beam out of his noble person and I would accept it and follow it as a command." (Nahju 'I-balaghah).

Ten years in the company of the Holy Prophet had kept him so close and inseparable, that he was one with him in character, knowledge, self-sacrifice, forbearance, bravery, kindness, generosity, oratory and eloquence.

He was so closely associated with the Holy Prophet that as soon as a verse was revealed to him during the day or night, 'Ali was the first to hear it. The Holy Prophet has said of Ali: O Ali, you are my brother in this world as well as in the Hereafter. I am the city of knowledge and Ali is the gate. Nobody knows Ali except Allah and I. Nobody knows me except Allah and Ali. If you want to see the knowledge of Adam, the piety of Noah, the devotion of Abraham, the awe of Moses, and the service and abstinence of Christ, look at the bright face of Ali.

When the Holy Prophet reached Yathrib (Medina) and met his followers who had come from Mecca at his call, he immediately appointed for each such followers a person from the people of Yathrib known as Ansar (Helpers), who had accepted his prophethood, to be a brother to him. His appointment of brothers was a great act of help for the refugees known as Muhajirun (Emigrants), who left their home and come to Yathrib. He made brothers of people who followed the same trade so that the Muhajirun could be usefully employed immediately.

We shall search in vain to find, either among his predecessors (save one) or among his successors, those attributes." Gibbon says: "The birth, the alliance, the character of Ali which exalted him above the rest of his country-men, might justify his claim to the vacant throne of Arabia. The son of Abu Talib was in his own right the chief of Banu Hashim and the hereditary prince or guardian of the city and the Ka'bah." "AIi had the qualifications of a poet, a soldier, and a saint; his wisdom still breathes in a collection of moral and religious sayings; and every antagonist, in the combats of the tongue or of the sword, was subdued by his eloquence and valour. From the first hour of his mission to the last rites of his funeral, the Apostle was never forsaken by a generous friend, whom he delighted to name his brother, his vicegerent, and the faithful Aaron of a second Moses."

Under Divine instruction, the Apostle of Allah married his beloved daughter Fatimah to Ali, though others vainly tried for her hand. Among their children, Imam Hasan, Imam Husayn, Zaynab and Umm Kulthum have left their marks on the history of the world. After the death of Hadrat Fatimah, Ali married Ummu 'I-Banin. 'Abbas was born out of this wedlock and was so handsome that he was fondly called Qamar Banu Hashim. He personified loyalty and bravery and proved it in the battlefield at Karbala'.

"The best deed during the month of Ramadhan is to keep away from evil deeds, which Allah has forbidden”.

After that he burst into tears. Imam Ali (a.s.) was quite shocked and asked him the reason: The holy prophet (pbuh) explained: "I am crying because I can see a terrible scene that will happen to you in this holy month. While in sajdah (prostration), the most criminal of criminals, will hit you on your head and your beard will be dyed red with your blood.”

It was on the nineteenth of Ramadan when Imam Ali (a.s.) proceeded to Masjid-e-Kufa. There he climbed up the minaret, recited the adhan (call to prayers).

As our Imam was leading the prayers, while in the 2nd sajdah, the assassin got up and quickly removed the poisonous sword hitting the Imam on his head. Imam Ali collapsed crying out "I swear by the Lord of Ka'bah , I have been successful."

Scared out of his wits, Ibn Muljam ran out of the mosque but was captured by a man from Hamadan. When he was brought before Amir al Mu'minin (a.s.) with his hands tied tightly, our merciful Imam ordered his sons to loosen the rope. He then advised them not torture him in any way and if he died from his wounds to deal with him justly. Our holy Imam asked Ibn Muljam: “WAS I A BAD IMAM OR AN UNJUST RULER?”

Our holy Imam suffered greatly for three days and finally on the 21st of the holy month of Ramadhan in the year 40 (a.h.) succumbed to his injury and was buried in the city of Najaf in Iraq by his two sons Imam Hassan a.s. and Imam Hussein a.s.

We can gain a lot from his knowledge, wisdom, worship, justice and many other good qualities. He loved children and took care of the needy and the orphans. Islam was truly reflected from this great man.