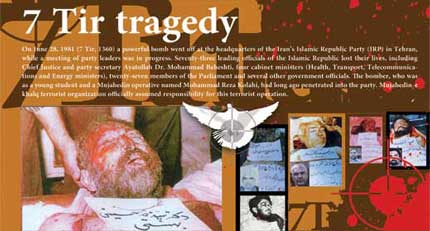 Failed to gain acceptance and popularity among Iranian nation after the Islamic Revolution, MKO terrorist group resorted to terror strategy and announced officially an armed conflict with the government of the Islamic Republic of Iran and the nation on 20 June, 1981. On this day, Masoud Rajavi, leader of the terrorist group, orchestrated a cruel and savage military show and ordered the armed contingents and members of his cult to rush onto the streets and begin the terrorist phase of their struggle against the government of Iran. Via this movement, they erroneously expected to spark a general uprising.

MKO terrorists blew up the headquarters of the Iran’s Islamic Republic Party (IRP) in Tehran, while a meeting of party leaders was in progress on June 28, 1981 (7 Tir, 1360). Seventy-three leading officials of the Islamic Republic lost their lives, including Chief Justice and party secretary Ayatollah Dr. Mohammad Beheshti, four cabinet ministers (Health, Transport, Telecommunications and Energy ministers), twenty-seven members of the Majlis (Iranian Parliament), and several other government officials.

The bomber, who was as a young student and a MKO operative named Mohammad Reza Kolahi, had long ago penetrated into the party. After planting the bomb inside the party building, kolahi fled the scene before the explosion.

During a meeting with Tahir Jalil Habbush, head of Iraqi intelligence under Saddam Hussein, MKO ringleader assumed responsibility for this terrorist operation.