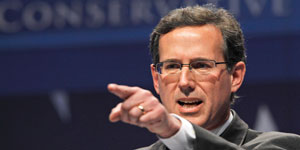 He added that, "I think we should send a very clear message that if you are a scientist from Russia, North Korea, or from Iran and you are going to work on a nuclear program to develop a bomb for Iran, you are not safe.”

Santorum claimed that while Iran is “in the process of developing a nuclear weapon, it appears obvious to me that the [US] administration is doing little to nothing.”

“We have done it; we have done it for American citizens. We are concerned when someone is producing a nuclear bomb that can be dropped on the state of Israel or provides a nuclear shield for a country which spreads terrorism with impunity and changes the face of the world,” he said.

Santorum's remarks come as yet another Iranian scientist, Mostafa Ahmadi Roshan, was assassinated on January 11 in Iran's capital, Tehran.

Ahmadi Roshan, a Sharif University of Technology chemical engineering graduate and the deputy director of marketing at Iran's Natanz nuclear facility, was killed immediately and his driver, who had sustained injures, passed away a few hours later in hospital.

The latest terrorist attack comes as Iran has reached an agreement with the P5+1 -- Britain, China, France, Russia, and the United States plus Germany - to hold negotiations in Turkey.

The US, Israel and their allies accuse Iran of pursuing a military nuclear program and have used this allegation as a pretext to sway the UNSC to impose four rounds of sanctions on Iran.

Based on these accusations, they have also repeatedly threatened Tehran with the "option" of a military strike.

This is while in November 2011, some of the US presidential hopefuls called for conducting covert operations ranging from assassinating Iranian nuclear scientists to launching a military strike on Iran as well as sabotaging Tehran's nuclear program.

The calls for assassinations are not idle threats as a number of Iranian scientists have been assassinated over the past few years. Professor Majid Shahriari and Professor Masoud Ali-Mohammadi are among the victims of these acts of terror.

On November 29, 2010, Shahriari and Fereydoun Abbasi were targeted by terrorist attacks; Shahriari was killed immediately and Dr. Abbasi, the current director of Iran's Atomic Energy Organization, only sustained injuries.

Iran says as the UN Resolution 1747, adopted against Tehran in March 2007, cited Abbasi's name as a "nuclear scientist," the perpetrators were in a position to trace their victim.

According to reports, Ahmadi Roshan had recently met International Atomic Energy Agency (IAEA) inspectors, a fact which indicates that the IAEA has leaked information about Iran's nuclear facilities and scientists.