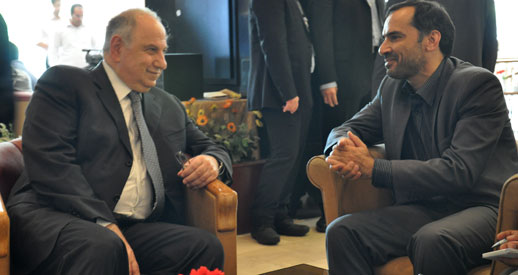 “In a single case only, they took 60 million dollars from Saddam monthly,” Ahmad Chalabi said in a meeting with Seyyed Mohammad Javad Hasheminejad, the Secretary-General of Habilian Association (families of 17,000 Iranian terror victims). “I heard this myself from a liaison who gave the money to the cult,” Habilian Association website quoted Chalabi as saying.

“All Iraqi leaders are fully aware of dangers of the terrorist cult,” Chalabi said. “Talking to Iraqi religious and political figures, I have often cautioned against dangers of the MKO’s extended stay in Iraq.”

He noted the MKO’s role in suppressing the 1991 Iraqi Shiite’s uprising (Intifada), insisting that the cult “cooperated with Saddam Hussein in all his policies and did everything to put his orders in action”.

“For the first time, I proposed the MKO’s expulsion and confiscation of all their properties when I was in the Iraqi Transitional Government,” Cahalabi added.

Cahalabi insisted that Iraqi leaders “are fully aware of the MKO’s banning Camp Ashraf-based members to meet their families” and they attempt hard “to make the meeting possible”.