The Mujahedeen e-Khalq terrorist group has claimed responsibility for the assassination of Ayatollah Sadoughi, the Supreme Leader’s Representative in and Friday Prayer Imam of Yazd, in 1983.
According to Habilian Association database (Specialized Center of Research on the MKO's Crimes), the MKO terrorist group has made the confession in No. 158 of the Journal of Mujahid, the group’s main press organ during early years of the 80s.
According to this news that the MKO’s publication has referred to it as a document for its bravely operations, on July 2, 1982, an agent of MKO named Mohammad Reza Babaei in a suicide attack assassinated Ayatollah Sadoughi, when he finished the Friday prayer and was leaving Mihrab.
Ayatollah Sadoughi is known in Iran as one of the Mihrab Martyrs (ones who were martyred in mihrab). 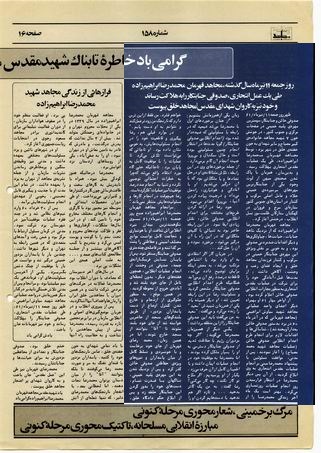