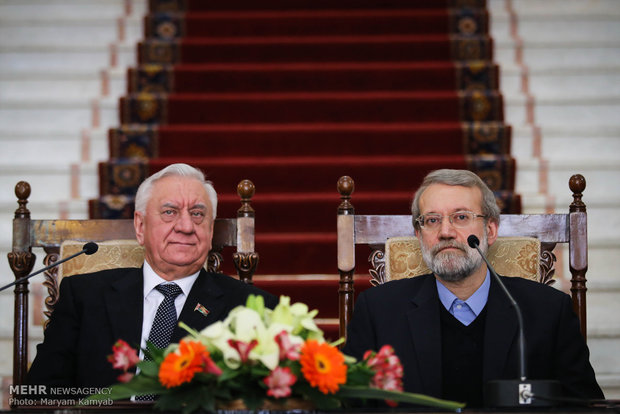 He made the remarks in a joint press conference with Chairman of the Council of the Republic of the National Assembly of Belarus Mikhail Myasnikovich on Monday.

Larijani said Iran and Belarus hold cordial and brotherly relations and have maintained it during different courses of time.

"Today we had useful negotiations in various fields, including developing parliamentary relations and applying the capacity of parliaments in international communities. Fortunately, parliamentary friendship groups of the two countries was formed to pursue the issues raised during the talks," Larijani underlined.

Larijani further noted that an important part of today's talks focused on expanding bilateral economic and trade cooperation, adding that the two countries enjoy great capacities to be used especially in the fields of agriculture and industry.

He said the two countries should encourage investors to become active and Iran accepts Mr. Myasnikovich's idea to support scientific and technological cooperation.

He pointed to the issue of terrorism, saying the two countries hold same concerns about the spread of terrorism and extremism and "we exchanged views over the cooperation in the field."

Mikhail Myasnikovich, for his part, hailed the success of the Islamic Republic of Iran in various economic, industrial, scientific fields, saying the two countries hold no different views in any areas, and this is very important.

Iran and Belarus are home to talented young people and the parliaments of the two countries should deepen cooperation to improve the younger generation, he added.

Larijani and Myasnikovich signed an MoU on bilateral ties on Monday to deepen cooperation in the fields of economy, trade, science and education, culture and tourism.