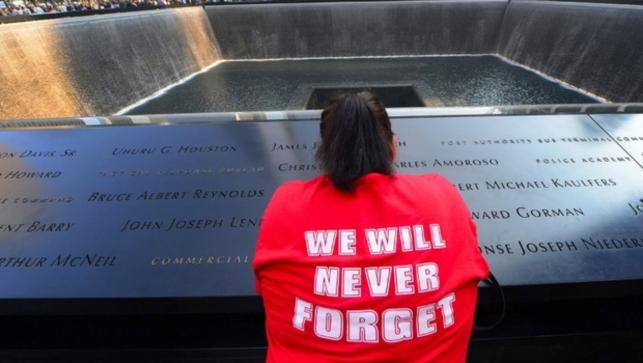 Is America Any Safer” is the cover story of this September's Atlantic magazine. CNN and other media outlets are also commemorating the catastrophic terror attacks on the morning of September 11, 2001. Reflecting their collective paranoia or delusions of persecution, and exaggerated self-importance, Americans in general are perplexed about certain things with regard to 9/11: a) what went wrong with their intelligence; b) why some people hate them so much; c) America is no longer invincible; and d) theirs being “The land of the free and the home of the brave” will always remain “Number One”. However, the politics of fear- and hate-mongering has impaired a large number of American minds, which only think Islamist terrorists are the sole security threat to their nation.

Some Americans honestly believe there are evil people around the world who are jealous of Americans, and hate their freedom. They aren't that different from some North Koreans, who also believe the whole world is jealous of their country. After a decade of teaching security studies in America – both in military and civilian settings – I am convinced the average American politicians, intellectuals, and generals believe terrorism is an original sin, and terrorists kill for the sake of killing! However, a ten-year-old American boy was exceptional. Moments after the second plane hit the Twin Towers, he quipped: “Why are they killing us? We must've done something wrong to some people, somewhere in the world”!

Fifteen years after 9/11, American media, politicians and analysts are evaluating what went wrong with American intelligence in 2001; and how much 9/11 cost the economy and society; and what else America should do to defeat al Qaeda, ISIS and of their ilk. There's no guilt, no remorse, no apology to the Muslim World for America's illegitimate invasions, GTMO, and Abu Gharaib.

American bombs, guns, and drones since Hiroshima have killed more than ten million unarmed civilians across the world. And who doesn't know this except the overwhelming majority of Americans? They know very little to nothing about their country's covert and overt invasions of countries, and promotion of terrorist groups across the world. Americans somehow were instrumental in the creation of al Qaeda, Taliban, and the ISIS, directly or through its surrogates like Saudi Arabia. It's sad but true; in 2011 America turned a blind eye to Saudi invasion of Bahrain to crush the popular mass upsurge of the Shiite majority against the Sunni rulers of the oil rich sheikhdom; and Saudi Arabia since 2015 has killed thousands of Yemeni rebels, with impunity.

America since 9/11 has confronted  “the newfound fear” … sometimes heroically and sometimes irrationally, mostly by fear-mongering and demonising Muslims, Syria and Iran. Meanwhile, the country has spent $1 trillion to defend against al Qaeda and ISIS. “Has it worked?” is the embarrassing question. While the State, DoD, and Homeland Security agencies had been trying to defeat al Qaeda, the more deadly ISIS emerged from “nowhere” in Syria and Iraq. One's not sure if America's Middle Eastern surrogates, Israel, Saudi Arabia and Turkey (which was in good terms with Washington until the abortive July coup in 2016) created the anti-Shiite/anti-Iranian ISIS – with tacit US support! It raises two diametrically opposite questions: a) Has the “War on Terror” been lost? b) Is the ISIS another US-sponsored false-flag operation?

The legacies of 9/11 haunt the world, and many Americans too. One knows about American and allied soldiers' indiscriminate killing and mass arrests of civilians in Afghanistan in the first few months of the invasion in November 2001. Hundreds of “unlawful combatants” from Afghanistan were tortured and kept behind bars at Guantanamo Bay Detention Center for years; a couple of hundred detainees are still there without any charges and trials.

The way US General Wesley Clark (ret.) publicly exposes the real motives of the American warmongers days after 9/11 is revealing. According to him, America didn't invade Iraq in 2003 for defending democracy, freedom, or America's Homeland Security, let alone 9/11: “About ten days after 9/11, I went to the Pentagon … and one of the generals called me in. He said, 'We've made the decision we're going to war with Iraq…. I guess it's like we don't know what to do about terrorists, but we've got a good military and we can take down government.'” He also reveals Pentagon's hidden agenda about invading seven countries in five years, “starting with Iraq, and then Syria, Lebanon, Libya, Somalia, Sudan, and, finishing off, Iran”.

Since invading countries for the sake of invasions being the raison d'être – America's mighty Military-Industrial Lobby loves mega wars in distant lands for the “profits of war” – 9/11 didn't precipitate the invasions of Iraq and Libya. The “profits of war” explain all American post-World War II invasions of countries, including Vietnam, Cambodia, and Laos; and millions of innocent civilians got killed in these countries.

However, democracy and free press create problems, even for the American hawks. What fascist, communist, and military dictators got away with – the world hardly knew how many people Stalin, Mao, or Saddam Hussein killed during their heydays – America's top warmongers, Truman, Johnson, Nixon, Bush Sr., and Bush Jr. couldn't hide from their own people and the world at large. Thanks to William Assange and Edward Snowden, we now know a lot more about American ways of illegitimate wars and invasions than before. We also know a lot about the part played by the US administration in operations that led to thousands of deaths of unarmed civilians in Syria, Libya, Afghanistan, Pakistan, and elsewhere.

The 15th anniversary of 9/11 is a time to reflect on as to how despite being democracies, countries like America, Britain, France, Germany, and Australia get away with invading countries, and killing tens of thousands of unarmed civilians. It's time to demand the trial of all war criminals that invaded countries and killed millions of innocent people during the last seven decades – from Hiroshima to Helmand, Aleppo to Fallujah, Sana'a to Mogadishu, and Bahrain to Beirut – for the sake of justice, and just and durable peace. It's time to stop demonising Muslims, Arab or non-Arab. It's time to inform the misinformed in the West about the lies, and deceptions their governments resort to justify invasions of countries out of sheer neo-imperialist design of plundering the weak and resource-rich countries in the Third World. American taxpayers must know that since 9/11, their Government has plundered around $3 trillion from them in totally unnecessary and illegitimate wars in Afghanistan, Iraq, Syria, Libya and elsewhere.

We believe America and its allies would be safe only when they would ensure others' safety, freedom, honour and dignity. They must be told terrorists just don't drop from the heavens; terrorism is a weapon of the weak, and desperate people resort to terrorism as their last resort, not as their first choice; Islam doesn't permit suicide attacks, and killing of innocent people; only imperialists and neo-imperialists wage wars and kill innocent people. Apparently, today America is safer than before while countries in the Third World worry if they are the ones America contemplates invading next to bring “freedom and democracy” a la Afghanistan, Iraq, Syria and Libya!

The writer teaches security studies at Austin Peay State University. He is the author of several books, including his latest, Global Jihad and America: The Hundred-Year War Beyond Iraq and Afghanistan (Sage, 2014).