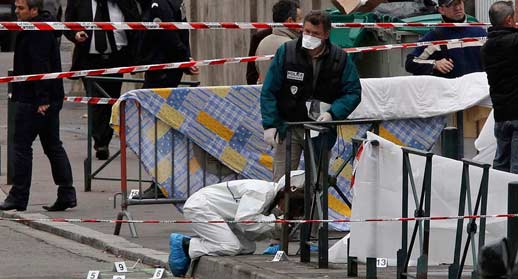 “The 19th march attack in Toulouse which led to the death of a Jewish teacher as well as three children sparkled a worldwide wrath, anger and hatred,” the statement reads.

“The brutal attack was a severe impact on public opinion rather than an ordinary crime, since three of the victims were defenseless children who became victims of plundering policies of the Zionist regime and terrorist rancour of al-Qaeda,” it adds.

“Zionists acts of state terrorism, religious extremism of al-Qaeda, and staunch support of some French politicians for terrorists around the world especially in France, have built an ominous triangle which drags innocent victims to death like 4 innocent victims of the 19th March terrorist attack,” it reads.

“Concluding from the records of the terrorist group which was perpetrating terror operations in Afghanistan and Kazakhstan, more terrorist acts in France are not far away,” the statement continues, adding that President Nicolas Sarkozy who called the shooting a ‘national tragedy’ has to know that organized attacks by such terrorist groups as Jund al-Khalifah and others associated with al-Qaeda against Jewish and French citizens will carry on. “Leaders of France along with al-Qaeda are responsible for the attack, since they have made their country a safe haven for notorious terrorists enjoying heavy criminal records in the French justice system.”

The statement stressed that a review of the French politicians’ support for the terrorist Mujahedin-e Khalq Organization (MKO, also MEK and PMOI) for over three decades indicates that supporting terrorists is a long-lasting policy (in France) which still continues despite lots of explicit warnings and evidences of their terrorist behavior.

“If French politicians heeded the undeniable facts, they would have seen the brutal self-immolation of MKO cult’s members on 17 June 2003 following the detention of Maryam Rajavi. If these facts were taken into account, the crimes of this terrorist cult after the Islamic Revolution and killing 12000 Iranians had to be remained in their minds.”

The statement further refers to the recent memorial stone found a few days ago in Camp Ashraf, MKO terrorists' headquarters in Iraq, bearing names of some high ranking al-Qaeda terrorists which revealed the alliance between the two terrorist groups.

Are the supporters of al-Qaeda, MKO, Jundollah, and other terrorist groups who are freely moving in Europe and the United States still cannot comprehend that wherever terrorists are, there will be terror, crime, violence, bombing, and they cannot prevent continuous state of red alert?

As the representative of families of over 17000 Iranian terror victims, Habilian Foundation expresses condolences and deepest sympathy to the parents, relatives and friends of the four victims who included three children. Although the perpetrator of the terror act found no opportunity for more terrorists acts and he was killed, the French politicians unfortunately have set the stage for development of terrorist activities in their country and they cannot expect that the incident is the last one in their country.