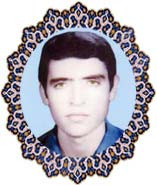 Karam-Ali Hasan Rezayi was born on March 29, 1959, corresponding with the 19th of Ramadan, martyrdom anniversary of Imam Ali (a.s.), in Ebrahim Abad village in Buin-Zahra, Iran.

He lost all his family members and relatives in the devastating 1962 Buin-Zahra earthquake which left 12,225 dead and injured, and placed under the guardianship of his mother.

Although the situation was very hard due to the economic plight of people at the time of Pahlavis’ dictatorship, Karam-Ali’s mother helped him continue his studies.

Finishing high school, Karam-Ali Hasan Rezaei’s intelligence allowed him the privilege of attending the Tehran’s University of Science and Technology in Electrical Engineering.

Owing to his efforts to preserve the achievements of the glorious Islamic Revolution, he was identified by Mujahedin-e Khalq terrorist group. Finally, on Friday 24th September 1981, while returning from Friday Prayer ceremony, Karam-Ali struck by Mujahedin-e Khalq assassins’ bullets and died on the spot.