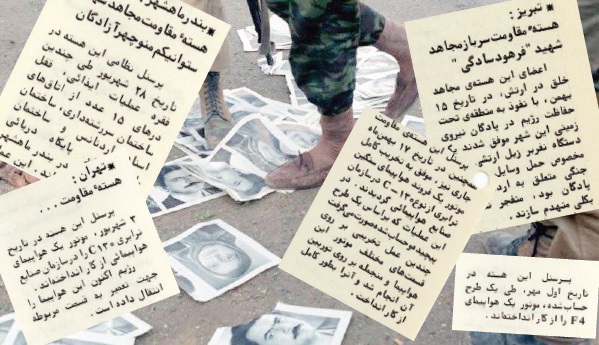 During the eight years of the Iran–Iraq War, the Mojadedin-e Khalq Organization (MKO) committed treacheries which were unparalleled at any point in history. Despite claiming to support Iranian people, they withheld no help and support from the enemy and joined them to invade Iran’s borders during an unequal war against their homeland. Throughout the Imposed War and especially in the final years, the MKO had an effective presence on the frontlines and functioned as a fifth column for the Ba'athist regime. But even before assisting the enemy and in fact, to prove their brotherhood to Saddam, they perpetrated many sabotages and deception operations inside Iran.

In September of 1984 and February of 1985, the MKO proudly admitted these operations and provided a report of them. These operations were carried out with the aim of weakening morale and disrupting people and fighters’ resistance and were divided into three general categories: 1. distributing hundreds of thousands of anti-war leaflets and writing slogans in all parts of the country including street walls, hospitals, and along the fighters and soldiers’ transportation routes; 2. burning dozens of cars and motorcycles; 3. disabling military equipment and generally, disrupting military units.

The following includes part of this report prepared by the MKO on their terrorist operations in which they acknowledge disruption of the defense capability of the Islamic Republic of Iran in 1984 and 1985.

Tehran, September 14, 1984: a deception operation on a Lockheed C-130 Hercules engine causing complete failure of its rotor and its transfer to another section for repair.

Mahshahr Port, September 19, 1984: disabling door locks of 15 buildings including the Army Commissariat Building, the Ordnance Document Building and the Inspection Building at Khorramshahr Naval Base located in Mahshahr port in a series of deception operations.

Tehran, August 25, 1984: disabling a Lockheed C-130 Hercules engine in the Aviation Industries Organization by the MKO’s members of the core of resistance.

Imam Khomeini Port, September 19, 1984: disabling door locks of an automobile carrying one of the Ideological-Political mercenaries of the Naval Base by pouring glue into them.

Isfahan, January 29, 1985: two operations on two F4 Phantom II through a complex and well calculated plan in Isfahan Air Force Base (Martyr Babaei’s Base) causing the destruction of two sensitive electronic devices used for precise navigation whose repair took at least a month and created a one-month delay in the flight cycle of these aircrafts which used to be regularly sent to combat missions.

Masjed Soleyman, January 30, 1985: attempting to disable a Chieftain Tank in Masjed Soleyman’s Tank Manufacturing Industries through using special destructive materials and pouring them into the tank engine, as well as doing other destructive actions leading to the destruction of more than 60% of the engine along with its cylinders, cylinder heads and their gaskets which made the tank unusable for a long time as it needed major repair and there was shortage of pieces.

Masjed Soleyman, January 30, 1985: blocking the way by gluing the main entrance door of the garrison mosque which was used by people in the Ideological-Political Section.

Tabriz, January 29, 1985: an audacious operation in which the fuel reservoir needed for Tabriz Army Base transport along with all its fuels were completely destroyed.

Tabriz, February 4, 1985: infiltration into the Army Base and blowing an armored personnel carrier which belonged to the Ordnance of the base and was used for transporting equipment and ammunition by planting explosives in the body of the carrier, which was parked in front of the heavy weapons arsenal and was under full protection.

Khash, February 4, 1985: disabling the engines of 7 tactical trucks which belonged to Ordnance of Khash Army

Tehran, February 1985: pouring glue into door locks of 4 automobiles belonging to the Political-Ideological Section, the warehouse door of Qasr-e-Firuzeh garrison, and the door locks of the large supply warehouse of the Zolfaghar Regiment garrison and blocking them all.

The MKO’s intra-organizational analysis of such operations was “using foreign war in favor of civil war and breaking the back of the Islamic Republic’s military”. Needless to say, the ulterior motive for the group’s operations was proving themselves to Saddam and the Ba'athist regime in order to gain the opportunity to have a camp in Iraq adjacent to Iran’s borders.