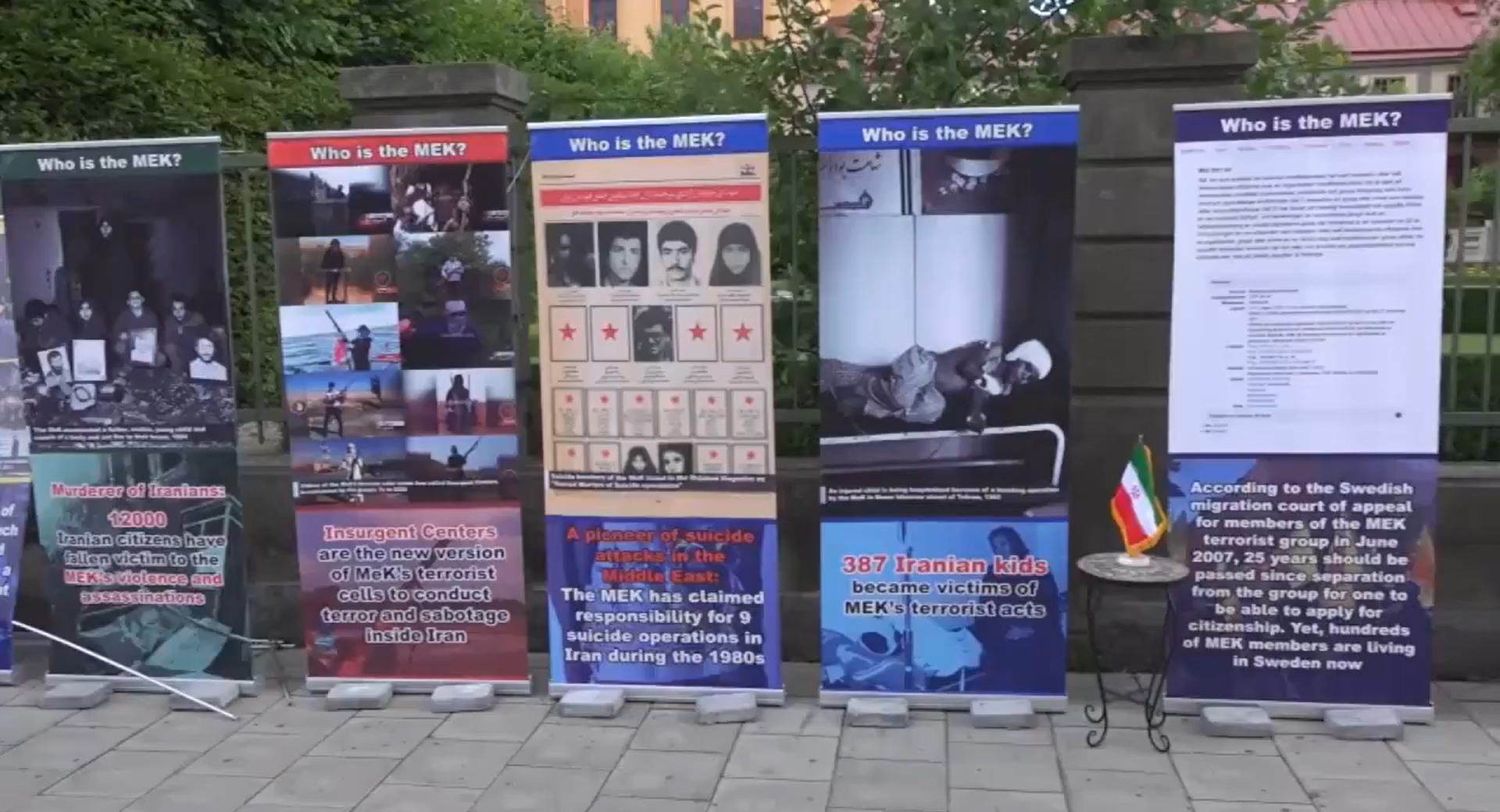 Members of the anti-Iran Mujahedin-e-Khalq Organization (MKO or MEK) terrorist group have attacked an outdoor exhibition held in the heart of Stockholm to expose the atrocities committed by the infamous cult against the Iranian nation.

Videos circulating online showed that the exhibition, held across from the Swedish parliament on Monday, was vandalized by MKO elements, one of whom managed to pass a cordon of security forces before he was arrested.

The individual tried to tear down the banners detailing the MKO’s crimes.

According to reports, more than 12 MKO members were arrested during the Monday assault.

The incident was filmed by two Iranian nationals who said they held the gallery independently to lay bare the true face of the cult.

“We felt responsible as Iranian individuals to reveal their true nature to the entire world,” one of them is heard saying.

He said the MKO members were threatening to “oust us and kill us,” adding,“We will be in fact honored to lose our lives in defense of our homeland.”

“We are proud to say that we, as two people without any coordination or affiliation with any organization, decided heartfully to stand up to them so as to show the truth to the world and expose their true nature before the whole world,” he added.

The other man, referred to as Shayan, said “I feel sorry for those who chose to shed the blood of their compatriots in defense of their enemies.”

The gallery was held near a court where the trial of an Iranian national, Hamid Nouri, has been held for alleged involvement in the execution and torture of MKO members in 1988.

Nouri was arrested upon arrival at the Stockholm Airport in November 2019 and was immediately imprisoned on those charges. He has vehemently rejected the charges.

The MKO has been responsible for numerous assassinations and bombings of top-ranking Iranian officials since the 1979 Islamic Revolution. Out of the nearly 17,000 Iranians killed in terrorist attacks over the past four decades, about 12,000 have fallen victim to the group's acts of terror.

One of the biggest attacks carried out by the group was the 1981 bombing of the Islamic Republic Party’s headquarters in Tehran, which killed Iran’s then-judiciary chief Ayatollah Mohammad Hossein Beheshti, and 72 others, including lawmakers and ministers.

The terrorist group also fought alongside Iraqi forces in the former Iraqi dictator Saddam Hussein’s war on Iran in the 1980s.

However, the US and the European Union removed the MKO from their lists of terrorist organizations in order to use them as proxies against Iran.

Iranian officials have condemned the “shameless hypocrisy” of the US and its European allies in supporting a terrorist cult that has Iranian blood on its hands.