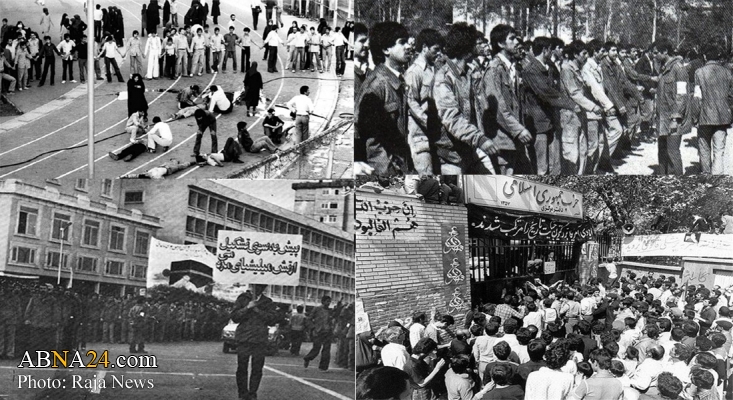 After the release of political prisoners on the eve of the victory of the revolution, and the subsequent release of Massoud Rajavi (a central member of the Mojahedin-e- Khalq Organization) in January of that year, members of the organization began to define their alignments with other groups.

Using thoughtful measures and taking the lead in criticizing the past performance of the organization and the slogans and goals of the early founders, he and his comrades resumed their activities. And In this way, they created a positive image for themselves and made the most of the revolutionary atmosphere for recruitment and reorganization. By formation and reorganizing, the organization published several books in the country by members to praise the organization's casualties. While, the problems caused by the Lack of teaching ideological issues in eliminating its shortcomings and ambiguities were forgotten, and pragmatism and power-seeking grew to the point that prevented the organization from properly analyzing and understanding the existing realities of society. Following this, the organization, from January to February 1979, in order to stabilize its position in the future of the Islamic Revolution, undertook a series of important measures. In fact, in these two months, the centrality of the organization devoted all its efforts to seeking a share in the future of the Islamic Revolution.

These people had the mission to introduce themselves as revolutionary figures, in other words, the owners of the revolution, through extensive and voluminous propaganda. These forces took part in mass demonstrations across the country at this time; and tried to Display placards, posters, pictures related to the organization, the logo of the organization as well as the sentences of its leaders and pictures of the killed people of the organization in order to gain a place for themselves among the people. In order to be able to acquaint the masses with themselves and to introduce themselves as militant, mujahid and revolutionary forces, if possible. Another important action of the organization at this time includes a large-scale effort of the centrality to gain management of the welcoming ceremony of Imam Khomeini or at least take responsibility in that ceremony.

Therefore, in February 1979 and in the days before the arrival of Imam Khomeini in the country, the Central Committee made extensive efforts to introduce the organization as the largest military force that has the authority to manage the reception of Imam Khomeini and protect the life of Imam; Therefore, they insisted that through this, the organization becomes the main circle around the Imam, so that when he enters the country, Massoud Rajavi and Musa Khiabani will be around the Imam. The effort of the centrality was to make history for the organization by placing themselves in the circle of Imam's entourage so that they could somehow confiscate the revolution and the Imam in their favor. In addition to the efforts of people like martyr Motahari and martyr Beheshti who were in charge, the stance of Imam Khomeini himself, who never even approved of the organization and never recognized them, was very effective in removing the hypocrites from the circle of Imam Khomeini when he arrived.

Therefore, with the efforts of Martyr Boroujerdi's group of seven groups in protecting the life of the Imam and establishing the security of the ceremony, a severe blow was dealt to the goals and plans of the organization.