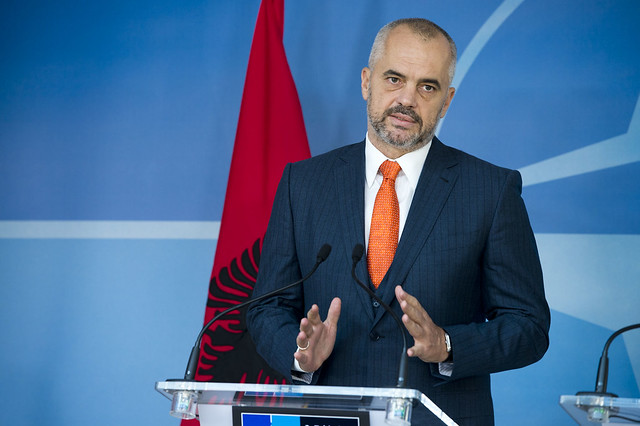 Frida Ghitis who is a world affairs columnist, a former CNN producer and correspondent and a regular contributor to CNN and The Washington Post warns about the threat of the presence of the Mujahedin Khalq Organization (the MKO/ MEK/ PMOI/ Cult of Rajavi) in Albania as a part of the already tremulous region of the Balkans:

It might have seemed like a barely consequential item amid another torrent of breaking news. But word that President Donald Trump’s lawyer, Rudy Giuliani, just attended the annual gathering of a controversial Iranian opposition group at its unlikely base in Albania should raise flags for many reasons, not least of which are concerns for Albania’s troubled and fragile democracy.

If Albania is now unexpectedly drawn into one of today’s most dangerous geopolitical conflicts—the one pitting Iran against the United States, Saudi Arabia and other Gulf states—the timing couldn’t be worse. The country is in the midst of a full-blown political crisis that has at times turned violent and whose outcome is still uncertain. A member of NATO, Albania has also been trying unsuccessfully to join the European Union for years; its current domestic turmoil makes that goal even more distant. To make matters worse, Albania’s infighting has turned it into an inviting target for malicious actors seeking to take advantage of a distracted, divided nation.

Giuliani, along with some other prominent figures, including former U.S. Sen. Joe Lieberman and British Conservative MP Matthew Offord, attended the annual “Free Iran” conference of the group known variously as the People’s Mojahedin Organization of Iran and Mujahedin-e Khalq, or MEK. A shadowy outfit committed to the overthrow of Iran’s theocratic regime, the MEK is often described as a cult and used to be classified by the State Department as a terrorist organization. Now, some of its leading backers work for Trump and his administration, putting Albania in the middle of the Iran file. Perhaps its biggest booster is John Bolton, Trump’s hawkish national security advisor, who wants the MEK to govern Iran.

The MEK has a strange and contentious history. It emerged as an Islamist-Marxist organization and militia in Iran in the 1960s and was staunchly anti-American. It killed members of the Shah’s police and played a key role in toppling him during the 1979 revolution. But it fell out with Iran’s new Islamist authorities after they took power, and was exiled from the country in the early 1980s. When Iraq under Saddam Hussein then went to war against Iran, the MEK—now fervently opposed to the Islamic Republic—sided with Baghdad and ended up building a base of operations in Iraq near the Iranian border, from which it staged attacks inside Iran.

Ghitis is concerned on the capacity of the MEK to turn into a tool in the hostile policies of Donald Trump against the Iranian Government despite the group’s unpopularity inside Iran. According to her analysis, this will draw Tehran’s attention to Tirana which is vulnerable enough to foreign meddling:

Since moving to Albania, the MEK had received only minor international attention. That changed with the Trump administration. Key administration figures have advocated for the group, some as paid supporters, others out of ideological conviction. Bolton and Giuliani in particular have promoted it as a legitimate government-in-exile that should eventually replace the Islamic Republic, even though it has little support inside Iran.

The Trump administration’s spotlight on the MEK is undoubtedly drawing the attention of Tehran at a perilous political moment in Albania. The Albanian government was plunged into crisis earlier this year when opposition parties withdrew from Parliament and demanded the resignation of Prime Minister Edi Rama, accusing him of corruption, election-rigging and ties to organized crime. Rama’s center-left Socialist Party holds a majority in Parliament, while the opposition is made up of parties to his left and right. Corruption has been endemic in Albania since the end of communist rule, but Rama generally enjoys the support of the U.S. and much of Europe.

Tensions in Tirana erupted last month after Bild, a German newspaper, leaked conversations from prosecutors’ wiretaps that suggested Rama and the Socialist Party were plotting with criminal groups to manipulate elections in 2016. Rama and his party deny any wrongdoing.

But their opponents took to the streets. Pitched battles ensued, with protesters lobbing Molotov cocktails and the police responding with water cannons. The situation got worse when the opposition declared it would boycott June’s municipal elections. President Ilir Meta then announced he was cancelling the vote and rescheduling it for October; without the opposition, he said, the elections would not be democratic.

Rama’s governing party, however, refused to accept the president’s move and said it would launch impeachment proceedings against him for it. Then it went ahead with the ballot. The turnout, unsurprisingly, was minuscule. With the elections’ winners ready to take their new posts across the country, some outgoing mayors refused to relinquish their offices.

The political scene remains tumultuous, full of tension, hyperbole and conspiracy. Meta has accused Rama of being a tool of the “deep state,” working with billionaire philanthropist George Soros to destabilize Albania and even establish a “dictatorship” encompassing Albania and Kosovo, “serving underground agendas.” The Albanian people, he told an interviewer, do not want to be a “colony in servitude of money-laundering and organized crime.” Instead, they want to be part of the democratic West, “to join NATO and the European Union.”

A deadline is looming for Albania: In October, the European Council will make a decision about formally launching accession talks with Albania. The street battles, the name-calling and the conspiracy theories all support the views of skeptics who say Albania’s democracy is not mature or stable enough to join the EU.
As if that wasn’t bad enough, trouble with Iran may be brewing over the MEK’s compound in Albania’s countryside, raising the risk of Iranian interference. Iran took notice of the gathering that Giuliani and others attended in Albania this week, with its state-backed media chastising the U.S. and other Western countries for siding with what it calls a terrorist organization…

The WPR correspondent finds the MEK and its violent approach against Iran a potential threat to democracy in Albania:
The MEK’s goal remains the overthrow of the Iranian regime, although it now says it has sworn off violence. The group’s rise in visibility amid the Trump administration’s standoff with Iran could make Albania more vulnerable than ever to outside meddling. The potential for a new crisis in Europe and within NATO, centered on Albania of all places, is very real.