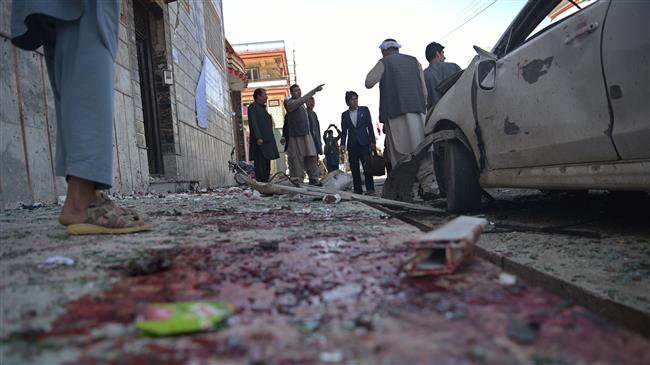 Daesh Takfiri terrorist group is growing in Afghanistan as thousands of foreign troops have apparently failed to restore security 17 years after the United States and its allies invaded the country under the guise of the so-called war on terror.

Daesh, which has been behind several past bombings in Kabul, claimed responsibility for a deadly bomb attack outside a voter registration center in the Afghan capital on Sunday. Over 30 people were killed and nearly 60 others wounded in the attack, which was carried out at the doorway of an identity card distribution and voter registration center in Kabul’s Dasht-e-Barchi area. The neighborhood in western Kabul is mainly inhabited by members of the Muslim Shia Hazara minority, who have been targeted regularly by both Daesh and Taliban.

In recent years, Hazara Muslims have been targeted in a series of deadly bombings and several large-scale kidnappings across Afghanistan, which have prompted demonstrations and sit-ins in Kabul and elsewhere. The community, the poorest of Afghanistan’s ethnic groups, accounts for about 20 percent of Afghanistan’s population and is the country’s third-largest minority.

A series of bomb blasts targeted a Shia Muslim cultural center in Dasht-e-Barchi area of Kabul in late December last year, killing at least 41 people and wounding dozens. In July 2016, at least 80 Shia Muslims were killed in two bomb blasts carried out by Daesh in Kabul. In November of the same year, at least 27 people were killed after a large bomb explosion hit a Shia mosque in the Afghan capital.

To add to the war-torn country's woes, Daesh has also established a foothold in eastern and northern Afghanistan. The terrorist group has mostly been populating the eastern province of Nangarhar, from where it has carried out high-profile brutal attacks at major population centers across the country.

Since late 2017, news reports have focused on Daesh’s growing presence in northern Afghanistan, especially Jowzjan, which borders Turkmenistan in Central Asia. These reports were amplified by Russia and other Central Asian neighbors of Afghanistan, which have voiced concerns regarding the reported presence of foreign militants, including Chechens, Uzbeks, Chinese Uighurs and some Arabs.

His remarks came after Leader of the Islamic Revolution Ayatollah Seyyed Ali Khamenei issued a similar warning about Washington's attempt to relocate Daesh from the Middle East to Afghanistan.

In the same month, Russian Foreign Minister Sergei Lavrov said Moscow was wary of Washington and NATO's denial of the presence of Daesh terrorists in Afghanistan.

In December last year, a high-ranking Russian official warned that an estimated 10,000 members of Daesh were present in Afghanistan, and that their number was growing due to the relocation of the terror outfit to the Central Asian country after territorial defeats in Syria and Iraq.

In November last year, Former President Hamid Karzai said the United States was colluding with Daesh in Afghanistan and allowing the Takfiri group to flourish in the war-stricken country.

Karzai said the administration of US President Donald Trump had also used Daesh as an excuse to drop a massive bomb on Afghanistan in April 2017.

According to Afghan intelligence documents, security officials believe that Daesh is present in nine provinces from Nangarhar and Kunar in the east to Jawzjan, Faryab, and Badakhshan in the north and Ghor in the central west.

Afghan President Ashraf Ghani recently said there were around 40 militant groups fighting in Afghanistan, which could make the prospects of a negotiated peace even bleaker.

Daesh began establishing presence in Afghanistan almost a year after making sweeping land grabs in Iraq and Syria in 2014. The Takfiri terrorist group took advantage of the ongoing chaos in Afghanistan and recruited some of its fighters from among Taliban defectors.

Since 2015, when Daesh made its first appearance in Afghanistan, the Taliban has in places made tactical adjustments with Daesh, and there are areas where the Taliban and Daesh have coexisted and even cooperated against Afghan security forces.