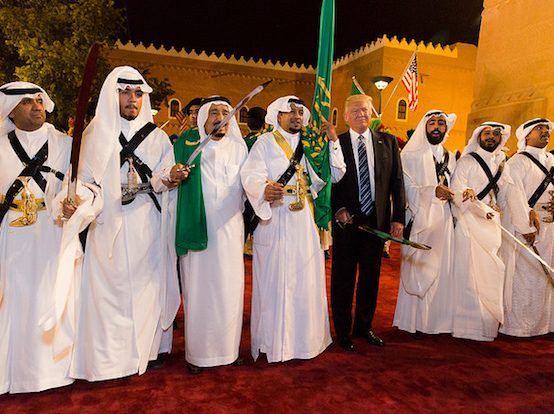 By Daniel Larison, The American Conservative
The reaction to Bolton’s appointment abroad has been mostly negative, but Bruce Riedel reports that the Saudis are very pleased:
The Saudis are very bullish on Bolton. The media has hailed his calls for “well ordered” regime change in Tehran and his promise at an opposition rally a year ago that he will “celebrate” with them in Tehran by 2019 [bold mine-DL]. The Saudi press is encouraging the Trump “war cabinet” to take on Iran, Turkey and Qatar to evict them from Yemen, Syria, Lebanon and Iraq.
It is a measure of how warped the U.S.-Saudi relationship is and how bad it is for the U.S. that the Saudis are excited by Bolton’s appointment because they assume it means that Americans will fight more wars for them. The “opposition” rally that Riedel refers to was the annual meeting where Bolton and other embarrassments go to bend the knee before the Mujahideen-e Khalq (MEK) leader, Maryam Rajavi. The Saudis have publicly embraced the MEK since one of their former ambassadors to the U.S. spoke at the 2016 rally, and now there is an MEK cheerleader advising the president. They are all united by reflexive hostility to Iran, and all of them are eager for regime change.
The MEK has no support in Iran, where it is widely loathed for fighting against Iran in the Iran-Iraq war, and it has nothing to do with the actual Iranian opposition inside Iran. Bolton and other American MEK boosters want to erase that distinction to make it seem as if their support for regime change has something to do with supporting the people of Iran, but that’s a lie. Most Iranians don’t want regime change and they certainly don’t want the MEK to take over. The fact that the Saudis and American hard-liners promote the MEK as the alternative to the Iranian regime just confirms Iranians in their distrust and loathing of the group.
Saudi enthusiasm for Bolton is unsurprising, but their government’s obvious desire to bog the U.S. down in more conflicts should cause Americans to rethink the entire relationship with Riyadh. The Saudi government is only too happy to volunteer Americans for wars that have nothing to do with our security, and Bolton has never seen an unnecessary war that he didn’t want to send Americans to fight. Between them there is a real danger that they will be able to persuade Trump to do what they want.