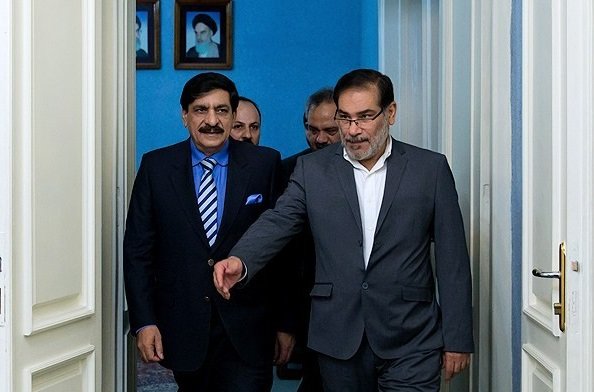 Secretary of Iran’s SNSC and Pakistan’s national security adviser have issued a joint statement on security where they emphasized upon fighting terrorism and extremism.

The outcome of discussions with Mr. Ali Shamkhani is a joint statement on security where both sides emphasized on regional security, fighting terrorism and bolstering fraternal relations between Iran and Pakistan. “Iran and Pakistan emphasize on friendly relations between two countries who had deeply-rooted ties, either cultural or geographical, during their history; both sides also reiterate their strong will and commitment to fight insecurity on both sides of the volatile borders, and instability in the Islamic world at large,” reads part of the statement.

“Both countries believe that establishment of joint commissions to promote the effectiveness of relevant agreements, address cross-border security, and other structures to buttress relations are crucial; we believe talks should be continued in the future and political, security, and economic officials should frequent both capitals to deepen ties and to lead the present relations in a better path,” emphasized the statement.

“Plights of the Islamic world including war, famine, and emigration, which we believe are inevitable outcome of planned targeting of Islamic countries to push them to the extremes of poverty and weakness, should provide us enough motivation to cooperate strongly against terrorism and extremist groups which poses mutual threats; we believe tackling terrorism should constitute a pivot of cooperation on peace,” it added.

“The ever-growing nature of threats by terrorism could not have been more devastating; fighting ISIL, which is a deviation from the standard Islam and which is a joint effort by enemies of Islam against unity of Muslims are mutually agreed issue between Iran and Pakistan,” it concluded.