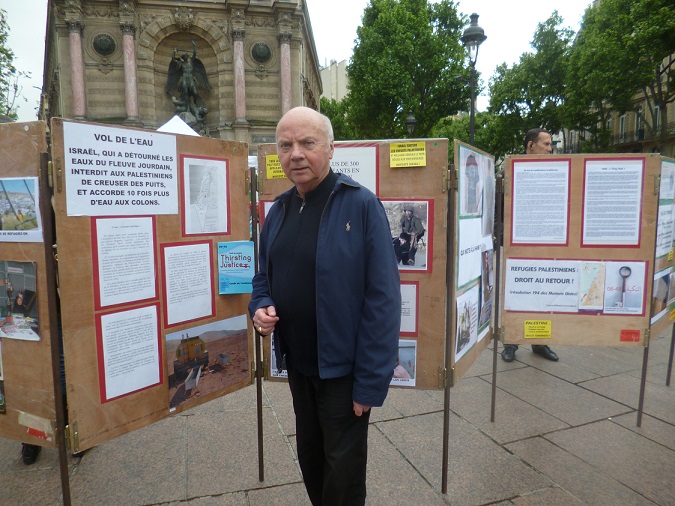 Jacques Jean Edmond Georges Gaillot (born 11 September 1935 generally known in French as Monseigneur Gaillot) is a French Catholic clergyman and social activist. He was Bishop of Évreux in France from 1982 to 1995. In 1995, by decision of Pope John Paul II, he was demoted to be Titular Bishop of Partenia, an extinct diocese, for having expressed too controversial and heterodox positions on religious, political and social matters.

Throughout 1989, Gaillot continued to cause considerable tension within the French Bishops' Conference, to the extent that the members of the episcopate voted to censure him. This disciplinary action came after Gaillot gave an interview to the publication Lui, the French equivalent of Playboy. Furthermore, he also gave interviews to leading gay magazines and lambasted the incompetence of the Roman Catholic hierarchy to judge the circumstances of homosexuality. At this point, the bishop offered his resignation to the Pope, should he feel it necessary to remove him; no such action was taken however. [1] He has expressed his publical support for euthanasia and same-sex marriage, when it was legalized in France.

In 2004 Bishop Gaillot met with Maryam Rajavi, MKO’s leader. Rajavi publicly thanked the bishop and expressed that his support had been very effective in promoting the cause of what she calls “Iran resistance”. Jacques Gaillot has praised the terrorists in Camp Liberty in Iraq for their brutal activities, what he calls it fighting for “bring freedom and democracy to Iran.” Camp Liberty in Iraq houses thousands of members of the terrorist group MKO.

The People’s Mujahedeen of Iran, also known as the Mujahedin e-Khalq organization (MKO, MEK, …) in its Persian acronym, is a terrorist organization, that has carried out decades of brutal terrorist attacks, assassinations, and espionage against the Iranian government and its people, as well as targeting Americans. The group used to seek to overthrow the Iranian revolutionary government with the help of Saddam Hussein during the Iran-Iraq War.

Founded in 1963 by a group of leftist Muslim Iranian university students as an Islamic and Marxist political mass movement, the MKO was originally devoted to armed struggle against the shah, capitalism, and Western imperialism. However, according to a report by the Christian Science Monitor, it was the only group that used violence against Americans in the run-up to the revolution, launching a string of assassinations and attacks against American military and diplomatic officers in Iran in the 1970s.

The US Department of State describes MKO’s terrorist activities as follows:

In 1981, MKO leadership attempted to overthrow the newly installed Islamic regime; Iranian security forces subsequently initiated a crackdown on the group. The MKO instigated a bombing campaign, including an attack against the head office of the Islamic Republic Party and the Prime Minister’s office, which killed some 70 high-ranking Iranian officials, including Chief Justice Ayatollah Mohammad Beheshti, President Mohammad-Ali Rajaei, and Prime Minister Mohammad-Javad Bahonar. These attacks resulted in an expanded Iranian government crackdown that forced MKO leaders to flee to France. For five years, the MKO continued to wage its terrorist campaign from its Paris headquarters. Expelled by France in 1986, MKO leaders turned to Saddam Hussein’s regime for basing, financial support, and training. Near the end of the 1980-1988 Iran-Iraq War, Baghdad armed the MKO with heavy military equipment and deployed thousands of MKO fighters in suicidal, mass wave attacks against Iranian forces.

The MKO’s relationship with the former Iraqi regime continued through the 1990s. In 1991, the group reportedly assisted the Iraqi Republican Guard’s bloody crackdown on Iraqi Shia and Kurds who rose up against Saddam Hussein’s regime. In April 1992, the MKO conducted near-simultaneous attacks on Iranian embassies and consular missions in 13 countries, including against the Iranian mission to the United Nations in New York, demonstrating the group’s ability to mount large-scale operations overseas. In June 1998, the MKO was implicated in a series of bombing and mortar attacks in Iran that killed at least 15 and injured several others. The MKO also assassinated the former Iranian Minister of Prisons in 1998. In April 1999, the MKO targeted key Iranian military officers and assassinated the deputy chief of the Iranian Armed Forces General Staff, Brigadier General Ali Sayyaad Shirazi.

In April 2000, the MKO attempted to assassinate the commander of the Nasr Headquarters, Tehran’s interagency board responsible for coordinating policies on Iraq. The pace of anti-Iranian operations increased during “Operation Great Bahman” in February 2000, when the group launched a dozen attacks against Iran. One attack included a mortar attack against a major Iranian leadership complex in Tehran that housed the offices of the Supreme Leader and the President. The attack killed one person and injured six other individuals. In March 2000, the MKO launched mortars into a residential district in Tehran, injuring four people and damaging property. In 2000 and 2001, the MKO was involved in regular mortar attacks and hit-and-run raids against Iranian military and law enforcement personnel, as well as government buildings near the Iran-Iraq border. Following an initial Coalition bombardment of the MKO’s facilities in Iraq at the outset of Operation Iraqi Freedom, MKO leadership negotiated a cease-fire with Coalition Forces and surrendered their heavy-arms to Coalition control. Since 2003, roughly 3,400 MKO members have been encamped at Ashraf in Iraq.

In 2003, French authorities arrested 160 MKO members at operational bases they believed the MKO was using to coordinate financing and planning for terrorist attacks. Upon the arrest of MKO leader Maryam Rajavi, MKO members took to Paris’ streets and engaged in self-immolation. French authorities eventually released Rajavi.

The group formally renounced the use of violence in 2001, but an FBI investigation found MKO members to be “actively involved in planning and executing acts of terrorism” as recently as 2004. In February 2012, NBC News reported that the Israeli government had coordinated with MKO to launch a series of assassinations against Iranian nuclear scientists. The group’s delisting may open the door to future cooperation with the United States as well.

The MKO was removed from the State Department’s terrorism list three years ago after a concerted lobbying campaign, which featured some of the most prominent politicians and officials in the U.S., including John Bolton, former U.S. ambassador to the United Nations; Tom Ridge, former director of Homeland Security; and Rudy Giuliani, former mayor of New York City.

the MKO is a kind of cult, according to the FBI, Human Rights Watch, the Rand Corporation, and just about every other organization which has investigated the group. It is precisely the kind of organization that should not testify about Islamic extremism.

Jeremiah Goulka, author of “The Mujahedin-e Khalq in Iraq: A Policy Conundrum,” a report published by the Rand Corporation in 2009, told MintPress, “At the MKO camps, there’s a whole set of practices that are all textbook out of cult theory – sleep deprivation, make-work projects… forced celibacy, forced divorce, [and] gender segregation.”

Masoud Banisadr, a former member of the MKO, who had served as the group’s representative to the United Nations and the U.S., confirmed that forced divorces were common in the group. Banisadr told MintPress: “All members were forced to divorce their spouses, and later they have to send their children abroad to Europe and United States to be adopted by supporters and other members.”

The group currently has an office on Pennsylvania Avenue in Washington, where they launch campaigns related to Iran, attend congressional legislative hearings about the country, and attempt to influence public perception of Iranian government.