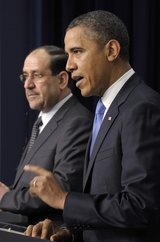 Turning a blind eye on MKO ringleaders’ vast lobbying campaign while paying big bucks to former high-ranking US officials, as well as their demonstration in front of the White House during the meeting of president Obama and Iraqi Prime Minister Nouri al-Maliki, they never referred to them even once during their Monday talks.

Iraqi Prime Minister Nouri al-Maliki on Sunday paid a visit to Washington in order to meet President Obama and discuss the post-war cooperation, when a group of MKO supporters gathered outside the White house gates calling for Obama to put pressure on Maliki about Camp Ashraf and take MKO off the list of foreign terrorist organizations.

According to a report published by Wall Street Journal Magazine, Obama and Maliki even didn’t address the fate of MKO members in Iraq. Notwithstanding all efforts of MKO leaders, their holding different kinds of conferences, lobbying and paying big bucks to former high-ranking US officials, the issue of Camp Ashraf and Mujahedin-e Khalq was not even mentioned during the meeting, and Obama ignored them totally.

The MKO is behind a slew of assassinations and bombings inside Iran. It started assassination of the citizens and officials after the revolution in a bid to take control of the newly established Islamic Republic. It killed several of Iran's new leaders in the early years after the revolution, including the then President, Mohammad Ali Rajayee, Prime Minister, Mohammad Javad Bahonar and the Judiciary Chief, Mohammad Hossein Beheshti who were killed in bomb attacks by MKO members in 1981.