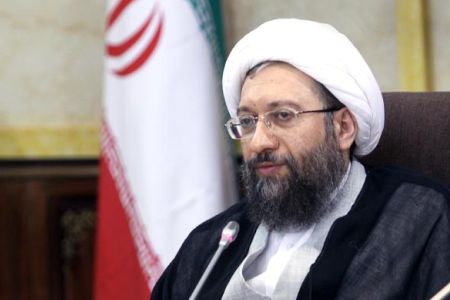 “There is a contradiction between the words and actions of Western countries on human rights and they impose their viewpoints of human rights on other states by media domination,” said Ayatollah Sadeq Amoli Larijani on Tuesday, Mehr news agency reported.

The Iranian Judiciary chief also criticized the West's support for certain terrorist groups such as Mujahedeen Khalq Organization (MKO) “that clearly violated human rights and killed many people.”
The MKO is listed as a terrorist organization by much of the international community and has carried out numerous acts of terror and violence against Iranian civilians and government officials.

The Iraq-based group is also known to have cooperated with executed Iraqi dictator Saddam Hussein in suppressing 1991 uprisings in southern Iraq and the massacre of Iraqi Kurds.

The European Union removed the MKO from its list of terrorist organizations in 2009.
In 2010, the European Parliament also issued a declaration and urged the US to remove the MKO from Washington's list of Foreign Terrorist Organizations. The MKO, which has been on the US terror list since 1997, filed a petition against the blacklisting in 2008.