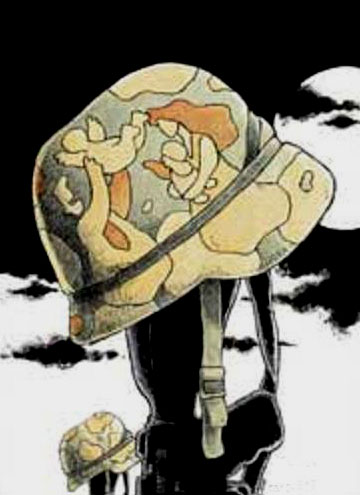 The disarmament of MKO forces by coalition forces in Iraqi Freedom Operation was one of the most problematic phases in the organization's history.

After the fall of Saddam Hussein and the arrival of US military to Ashraf garrison, MKO leaders made significant changes in their policy in order to maintain their garrison. To be able to prolong their stay in Iraq, they shifted their agenda to get close to "Enemy", because they needed to maintain Ashraf at any cost even the cost of violating the principals of the organization! The only way left to keep Ashraf was to get along with the American's policy. MKO was classified as a foreign terrorist group so admitting the relationship with MKO by US was seriously doubted.

Although Iraqi people seriously opposed the existence of MKO in their territory, neither MKO nor US paid attention to them.

The huge turn in MKO's policy regarding US was not acceptable to a large number of ranks who were not aware of the group's equations with the world. The leaders of the group thought of making some excuses to repair the minds of those who had hesitated to obey the new policies, so they started holding daily political meetings. During the meetings they had to answer a lot of questions crossed members' minds like:"what does an army without arm mean?" "Why don’t we give up?" "What are we hopeful for?" or "You said and you are still saying that struggling without arm is meaningless, so what happened to those slogans?" and etc.

Meanwhile, the argument on "family" was brought about. The leaders were sure that if the notion of family had been revived in the minds of members, they could have no longer stayed in the camp. This fact terrified the leaders who had to encounters various problems in the camp.

Thus the disarmament of Mujahedin Khalq Organization became the key factor to break the spell of the members' minds. They started thinking about their past and future which seemed catastrophic to the leaders. It was just like an enzyme called family that affects all political, strategic and organizational lines in MKO. Eight years past that time, the leaders of cult are still incapable of controlling those minds that are seeking family and future.

Today the families who are on strike at Ashraf gates are not allowed to visit their children but their presence is like an encouragement for Ashraf captives who see them near to themselves. They see a number of people thinking of them. They find out that family and love are not dead, although Rajavi wants to kill them.

The Rajavis may be able to penetrate Iraqi political parties and members of its parliament; they may succeed in buying the votes of Iraqi tribe leaders spending large amounts; they may be able to destabilize the political scene of Iraq in their own favor by working with US intelligence, to maintain Ashraf Garrison for a few more days but they never succeed to bar members' emotions and love. A day will come when the emotions will be so powerful that will cope with the whole money and deception the Rajavis spend. That day is not far away.

If they are defenders of human right, why they keep elderly parents and young children out of the camp and prevent them from visiting their loved ones?

I remember they told us:"we delivered the arms to take care of the arm owners" but I know the fact was something else. Rajavi never concerns about the lives of people. The fact was that Rajavi knew that his absolute power over his organization system would disappear if he didn’t deliver the arms. He didn’t think of his ranks at all. He just chanted these slogans to deceive our minds, the minds of me and my comrades who used to adore him but his lies worked for only two years then everything broke down in our minds…